My son has a loft bed and he is in the habit of keeping all of the books he is reading on his bed so he doesn’t have to climb up and down the ladder. Over time, the books accumulate to the point where there’s barely room left for him. So we were looking for a way to get his books off of his bed and onto the wall, but because space is limited, there isn’t room for a conventional book shelf up there. So I went looking for a solution.

A few years back no one had ever heard of gutter shelves. Then some clever person realized that they could put their kid’s books on a wall in such a way that would make it easy for them to see all of their books at once, and now gutter shelves are everywhere. The problem with them, as some other bloggers have pointed out, is that while they sound like a cheap alternative to shelving, all that hardware is actually pretty expensive.

You know what else is expensive? This shelf that they sell at Lowes. Are they kidding with that? It’s only three and a half feet long, and it cost $45! That’s nuts. We really liked the look of it, though, and it would serve our purposes well since it doesn’t stick off the wall very far. I’m pretty handy, so I figured I could come up with something that looked and worked the same, but was much cheaper. Which is why I’m going to show you how I built a very similar shelf, twice as long, for about ten bucks (twelve actually).

You will need some tools, and some skills with a miter saw. You will also need some glue and some screws. Assuming you have all of that, here is the material:

The MDF moulding might be a bit warped, but that shouldn’t matter. Make sure you get a furring strip that is straight – they are usually very warped, so you might have to hunt through the pile to find a straight one. The moulding will follow the contour of the furring strip, so if it isn’t straight, your shelf won’t be either. 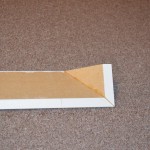 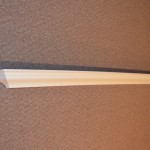 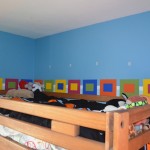 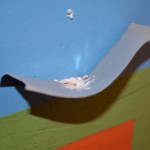 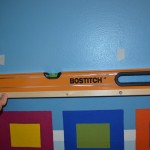 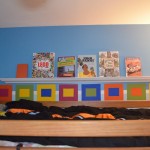 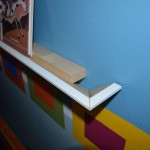 Decide how long you want your shelf to be – you will need about a foot of the moulding to cut the ends from, so the maximum shelf length is about 7 feet. I made mine about 65 inches. I mitered the ends of the long piece, then cut end pieces to give it a clean finished look. I glued these end pieces with wood glue, and used masking tape to hold them in place while the glue dried.

Next I mounted the furring strip to the wall to form a cleat that I could attach the moulding to. Even though this shelf won’t be supporting a lot of weight, I marked the studs and attached the cleat using screws because I avoid drywall anchors whenever I can. Because I didn’t want to move the bed, I used this trick with duct tape to catch all of the dust from drilling – then I carefully peel the tape off the wall and roll it up trapping the dust inside! No clean up afterwards! I put a screw in one end and then leveled the cleat and put the other screws in.

Once the cleat was mounted, I just put the moulding up against it, and put a few screws through it into the cleat to hold it in place. You can also countersink the screws, putty the holes, and paint them, if you are really ambitious. The cleat and the moulding form a nice groove that will hold most books (you know, unless your kid is reading Atlas Shrugged or something). That’s it! Okay, it’s not actually a gutter shelf, but I think it looks a lot better and it doesn’t cost as much.

I Am The Lorax

Using All Of The Space