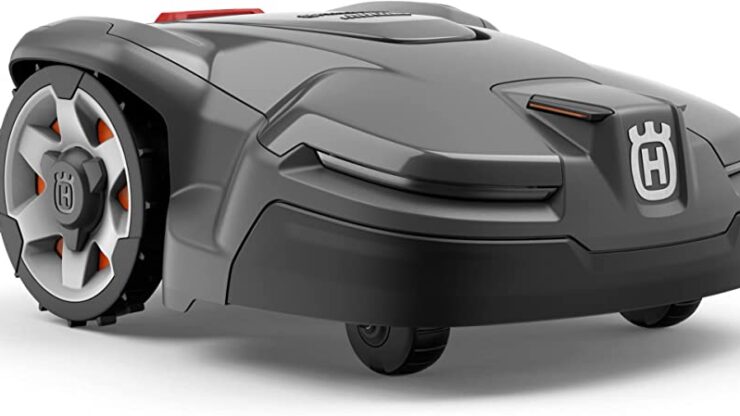 Our old Troy-Bilt riding mower shot craps in May with a flat tire and something else wrong with the transmission, so it was time to do some shopping for an alternative. We seriously considered a couple of Babydoll sheep as a replacement, but in the end, I was looking for less work, not more. For about the same price as a brand new riding mower, the top robotic mowers mean less impact to the environment and lower long-term operating costs (I can replace a lot of batteries for what I’m currently paying for gasoline). So it made sense to make the move, and the Husqvarna name weighed heavily on the decision-making process, especially after I watched this documentary about the history of the Automower.

Once the decision was made to go robotic, it came down to a price versus features comparison and I eventually landed on the 415X based on the size of my yard and I liked the security features built into this model that will deter anyone thinking about walking off with our little mower (which we have named Shaun).

Make no mistake, it’s a lot of work to install and set up this device, and I just happened to pick the hottest day of the year to start this project. Leveling and installing the charging station took about half of a day but that is mostly because my walkout basement means that the back yard has a lot of slopes, and not much level ground. I also took the opportunity to run conduit and install a new outdoor electrical outlet so we would have a convenient place to plug it in. Laying the boundary wire took about 12 hours for my back yard (which is about one third of an acre). All told, it was basically two full weekends to get the mower up and running.

After it had been working for about a week (mowing around 3 hours per day), I could tell that I needed to expand the mowing schedule. It hasn’t helped that we’ve seen an unusual amount of rain here in July, which means the grass is actually growing faster than I would expect this late in the summer. But Shaun seems to be equal to the task.

I have had a couple of instances where he gets a little confused trying to find his way back to the charging station, so I’m still having to tweak the guide wire and the boundary wire around the charging station. For some more detailed information, check out the short video below, and please comment if you have questions.